WRITER’S BLOCK – a curse or a blessing?

Ok, this is not something I usually do. At least, not since I left journalism a while back. But, I will do it today. Why? Maybe, I have nothing else to do since I am stuck somewhere on a story I am taking forever to finish or maybe it is the fact that I believe there is so much that I have seen around and heard to make me want to do it.

Well, some of you guys reading this would have in one way or the other, or at one time or the other, heard about the term writer’s block. And if some of you have not, it is described in The Free Encyclopedia (Wikipedia) thus: “Writer’s block is a condition, primarily associated with writing, in which an author loses the ability to produce new work. The condition ranges in difficulty from coming up with original ideas to being unable to produce a work for years.” 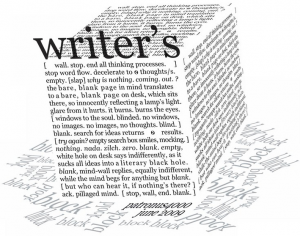 Writer’s block is an intriguing concept for me, it is such that at different times it had dominated discussions at tables where I and my literary friends sit to chit-chat and you know, do stuff. Sometimes, the discussions get so long-winding and hair-raising you would never believe we were discussing writer’s block. I still remember one of my friends who always said, “I never suffer from it.”

Well, I find it hard to believe. But, that is just me. Maybe you do….

According to this my friend, he believes that others who suffer from such an affliction are probably lazy or have not found an angle to beating the angst. To him, if one keeps writing – writing anything at all, even if it is to doodle on a piece of paper for a while, the block will be dismantled and the full flow of penmanship will thus be restored. It is like breaking down a barrier by constantly bashing against it with all the strength one has.

Well, that may be true. And it may also work. However, I do believe that Writer’s block is real and does happen. In fact, there is enough documentation on the matter for there not to be an argument on the matter.

Ok, now don’t get this wrong. The arguments we went into at this jolly, round or oblong table discussions filled with different assorted stuff is never to debunk or verify claims of people who actually suffer or don’t suffer from it. However, it was always centered around the different approaches people employed to rid themselves of the curse.

Like myself for instance, I suffer writer’s block A LOoooooooot!!! I do have ideas, but I just have this inability to put it out. In dealing with that, I just leave the idea to ferment until when I can get back to it. I never fear losing that idea, as I have never once done so. This way, I believe I eventually get better out of the idea when I eventually decide to put it out – or so I think. To me, it is what I call my Fermentation Process.

For some others, they do the writing-till-the-wall-of-Jericho-falls thing. That too works, but does it bring out the best in a pen hand? Maybe and maybe not.

For me, I have refrained for so long to enter this argument publicly. But, I have seen some pretty watered-down quality from particularly good quarters in recent times to force me to write about it. Not so much about the writer’s block, but about how my literary friends attempt to deal with it. Interestingly, quite a few have gone the write-till-the-wall-of-Jericho-China-and-any-other-wall-sef- falls route.

For most of us, we are driven towards perfectionism and this means to us, the works we put out must have the highest degree of finesse, quality and substance. It must be perfect to us before we are comfortable enough to put out for public consumption. And for this level to be achieved, a certain period of incubation or fermentation must elapse. Or again, maybe that is just me?

According to Arthur Hermansen, “ Most experienced writers opt for a standard of making the work as well made as they are personally capable, then seeking exterior feedback for improvement/changes. It must also be stated for objectivity on this aspect of the issue that rarity and originality of the work being developed will factor greatly into the definition of perfection for any given manuscript.”

Churning out a literary work every other day or week, whether they meet requisite ‘personal standard’ or not, is not the ideal. Soon, and in little installments quality begin to drop and eventually, the stories or poems or whatever fictional work may begin to have the same thread/theme, feel, flow, texture etc. It is something we find in music – with certain artistes accused of singing in a particular way to certain kind of beats all the time. It is akin to the tiki taka in soccer and we all know what happened to tiki taka? In non-fictional work, it is probably easier to get away with it without much being lost or noticed, but when you write creative pieces like in fiction work, perfection is a more elusive quality to capture. Hence, there is a higher chance to be caught out when we put to press every other day or week. As a matter of fact, one can be that prolific but is it sensible to put out so much so quickly?

I believe some of my literary friends fear writer’s block, because they see it as a sign of inadequacy, incompetence or failure. To some of them, there is a reputation to keep up with. So, if they do not write they have failed. So, they must write and more essentially publish what they write.

There is nothing wrong with that though, however, the thing is – soon, people (readers) will get tired or they (writers) begin to lose quality. It is the potential pitfall that await such a tactic.

Tupac Amaru Shakur had so many songs recorded, but not all were released at once or at a steady pace. As a matter of fact, I see a noticeable pattern in the music industry – artistes release new songs/albums, not every year. Maybe an album is released every two or three years. In the interval, they release singles to whet their audiences’ appetite. Maybe, this is what some of us need to start doing. Embrace writer’s block as an opportunity to churn out a better work after, proper incubation of an idea, rather than rushing to press with a piece once written and proof read by a bunch of people.

Again, to work around the writer’s block conundrum, some have started engaging more in what is called a VOICE BLOG POST or AUDIO POST. Personally, I just feel it is a lazy attempt to just get out there. I say this for those that come out that way to me, because they don’t seem logically put together or articulately presented. Many come out as stuff being bandied around in backyard discussions.

I believe I might have trod on a few tails with this write-up, but I am sure I have also hit a few right chords (or maybe a lot of wrong ones). But, for all it is worth I strongly believe that writing is not primarily for the gratification of the author. According to Arthur Hermansen, “…authors work undaunted all the time no matter what topic they pursue because of commitment and love for literary artistry or advancement of human knowledge or experience through discovery….”

In the end maybe it is not about writer’s block at all, but more about a re-evaluation of an entire idea to find a better angle to presenting it for better appreciation by the reading public who do figure out quality work when they see it and know when they are being fed half-baked bread. Maybe, it is also a matter of just simply knowing when to put out your work and when to hold on and let the audience enjoy all you have out there and ask you for more for them to enjoy.