by shaiontheprowl
in A TIME TO KILL, PROSE
Reading Time: 6 mins read

Read the story so far here : 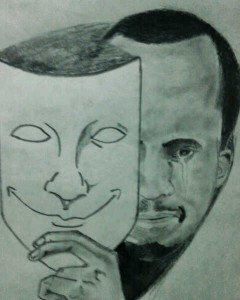 “Sooner or later, a travelling man always comes back to where he has been. Just the same way a murderer cannot fight the urge to return to the scene of his or her crime. It is a magnetic … magical pull,” Tunji finished off while still pecking at the top of the table with his pencil. He had gotten that quote from a book or a movie. He was not sure which, but it felt good quoting it to his assistant, who stood a few feet away from him going through her phone.

He grinned at her when she glanced at him with an incredulous look on her face, then pointed again at the pile of files on his table changing the shape of his facial muscles slightly to reveal a frown. It was everything they had gathered on the ‘Night Time Killer’, and on the open screen of his laptop was more. He and Modupe had been on another one of their brainstorming sessions. This time, he made a mental note not to think about her sexually. That was not good for concentration and it would be awkward to be caught looking at her in a way other than professional.

“Majority of murders are committed by people known to the victims. One advantage is knowing that once there is an unsolved murder out there, there is still a chance to solve it,” he was enjoying himself. He beamed at Modupe as he dished out another nugget of investigatory knowledge he had picked up somewhere.

“Yes, and this is exactly why we need to go back over the facts of this case again. It looks to me like we missed something. Something very vital to solving this case. Moreover, maybe we need to go over the witnesses again and also over the residents of the areas where the bodies were found. Someone is sure to have seen something. Especially, the guys who would normally not be at home at the time of the day when the interviews were first conducted. They seemed to have been overlooked in our investigation altogether.”

Tunji paused, his hand hovering over the desk like those of a butcher who had the cleaver hovering over a particularly stubborn piece of cattle chest bone. His temples tightened in concentration as he digested what she had just said.

“What did you say again?” Modupe was about to repeat herself when Tunji sprung up from the desk and approached her.

‘He was quick, damn he was quick!’ she thought to herself. He moved as swiftly as the wind itself. No! Faster than the wind itself. She remembered that one time she had been cornered while chasing a particularly notorious street urchin in one of the most notorious areas of the city. They had bust a gang which specialized in kidnappings. She had chased him blindly into a compound, not aware it was an ambush. She probably would have been maimed that day or worse, if not for Tunji’s quick feet and reflexes. He had taken out the three guys who had come out of nowhere to accost her with lightning speed. It was the reason she transferred to his unit a few months after.

The loud buzz of the table phone interrupted her thoughts and stopped Tunji in his tracks. He went back and picked the call, after a few seconds of listening dropped the receiver back in its cradle and faced her with a totally different look than the one he was wearing only a few seconds ago. From the look in his eyes, it was clear something was up.

“Never mind about the residents for now, you have to get the team together. We have work to do. Number 7….” He was gone before she could respond or ask him what was up. He was out of the office like a flash, leaving her to stare at his retreating back.

‘Damn! That dude is quick’, she thought to herself as she punched numbers into her phone to round up the troop.

Now it is time to get to work, lil’ man. Let us write ourselves another chapter in this very good story.

IT IS TIME TO KILL!

I stared at the computer screen and the lengthy flow of words that had been written in the course of the night and early morning. It was no longer new seeing half the story completed before I come awake to full consciousness, but still those were not words I had written. But, I knew for sure they were typed by my fingers. I could feel the numbness on the tips of my fingers. The whole chapter looked done and dusted, like all the rest before it. I continued to stare at the screen as I tried to focus on the words and tried to figure out what had happened. I scanned the work quickly, but not in that scared and confused way I used to in the beginning when I first started having this story written for me. In fact, it was now so much a part of me I took little notice of the fear. Rather, reading the work done overnight afforded me an opportunity to piece together what happened while I was blank and unconscious of my actions. I stopped short, it is not my intent to begin to analyze what happened. But what I read on the screen couldn’t have been my handwork. The details of the scenes in the book so far was shaping out to be the scariest thriller I had ever written.

I knew it was not just me, I had plenty of help both theoretically and practically. I was as involved as any common criminal could be involved in a petty theft at the local store. However, a part of my mind still refused to accept responsibility for these murders. Those were what they were if one considered everything that was in the scripts. Not even after I read reports in the papers and online could I accept the responsibility. I am not the one the social media channels were now calling “Night Time Killer”; that was not me.

It was not I who did all those sorry things to the girls. As a matter of fact, I knew it was not me…it could not have been me. I was not capable of all those things. I cannot even talk to a girl to save my life. It was the devil. He comes when he wants. He goes when he wants. But, the devil is not me.

He was inside of me. He owned me.

I knew I looked shitty. But, when I ran into Vincent at the gates, it was the last thing I wanted to be reminded of.

“You look shitty, buddy!” he boomed in his usual bombastic manner. His voice was rich, but not as cheerful as usual. Vincent slapped me in the back as he stepped into stride beside me,” You look like you have been involved in a train wreck. What’s going on Buddy?”

I kept walking for a while in silence. I needed him off my back. I was not just looking shitty, I also felt shitty. It was worse than being hit by a truck. I felt like I was only joined together at my joints by screws and bolts.

‘What was going on?’ God help me if I could tell him… if I could tell anyone. I had thought of going to the police once. That night I thought about doing it, the thought was put out of my mind forever by the eternal voice that had become a part of me and my life.

The body must obey the will, Boyo!

That damned voice had crept out of nowhere, driving all thoughts of going to the police to own up to the deaths of the girls out of my mind. The fear of the devil, and what he was capable of doing – to girls, and the promise of what he would do to me if another soul was told what was going on kept my mouth shut forever.

And Boyo, I am yer other half.

Going to the police was out. Telling anyone else was also definitely out.

“Nothing. I am just unwell,” I kept walking and didn’t look at him. Vincent grunted and panted as we approached the office doors, “Maybe you should see a doctor. You have been off for weeks now and it is beginning to show.”

I stopped short in my tracks but Vincent just kept going and disappeared behind the swinging doors.