The Girl That Keeps Appearing

I told you I was going to be sharing things from friends here. Well, I came across this story through a friend. She told me about this 13yo girl who wrote “something worthy of taking a look at”. I decided to “take a look” and I think you should too. Rough around the edges (in several places), yes. But, it is still a good story. And so, I give her a platform to tell it to more people.

One lifeless night, me and my brother was sitting in the living room watching T.V. Advertisement came on but the lights went off. I sighed and started to grumble. I looked over to the dining room and saw a girl walking over to me. I couldn’t move or hear anything. The place was pitch black but she was the only thing glowing. She was coming closer to me but the lights came on and she disappeared. Then I was able to move and hear. I looked at the time and saw it was 3am.

The next day, I woke up for school. I thought to myself it was just a hallucination but I was wrong. She was real. I went to the bathroom to get my shoes and the light went off. I ran from the bathroom because I was afraid of staying there when it was dark. I went to my brother’s room and lean on the door, sighing in relief. There she was again sitting on the bed as if she was waiting for me. I panicked and couldn’t do anything. She told me something and went through me. But honestly, I didn’t know what happened. When the lights came, I found myself staring at the floor. And I could never stay in the dark for two minutes.

Some days passed since I saw her. I told my friends in school but they just laughed. This time it was my room. I was sitting down and watchin T.V when the lights went off. When I wanted to cover my whole body, she appeared on the T.V. I panicked under the cover and didn’t want to come out again.

It wasn’t soon I fell asleep and I saw her in my dream when she was a child. She was running away from something I couldn’t tell what it is. I woke up sweating and went back to sleep. But anytime I dream of her as a child, when I go to sleep again I see someone I live die in front of me.

I saw her again in fasting time. My brother and my little sister were sleeping next to me when mysteriously the light went off again. I was scared and saw her evil grin behind the curtain. She came next to me and stretched her hands out and some purple light came and I felt as if my brain was being squeezed but thankfully I woke up after 7hrs of being out cold. You might say I made it up like the others did but I didn’t, all of this happened.

And she is still there. 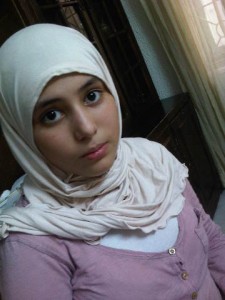 Sarah Yassin wants to be a ninja in future; and if that doesn’t work out, then Art it is. She loves drawing. Wants to travel around the world much later and doesn’t believe women are weak or daft.