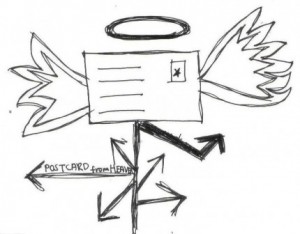 This letter will most definitely come as a surprise to you. I’d have preferred it if it were a pleasant surprise. However, am afraid it is not going to be as I wish.

It will be the first letter of its kind I am writing to you. It will also be the last one you will ever get or read from me.

My heart ached as I wrote that preceding line, but aching is minute compared to how I have felt, how I am feeling and what I don’t want to feel again.

I never said enough of these things to you. Never fully made you understand me, for ME.

I however must write all of it down now. I can’t face you again. Not after Tuesday. Not after you told me all those things you said to me. How can I? I lost every sense of ‘me’ that night. And hence, it is why I have to leave this letter, so that you will understand (later) why it must be like this.

I do love you!

Yes. I love you. More than you’ll ever realize. Maybe, you might have understood if I did tell you. But, being me I didn’t give you enough credit. Or perhaps, I was too afraid of what the consequences will be if I ever encapsulated my emotions in words.

I have never said this to you before, I know. Maybe, I should have done so at every opportunity I had. But then again, I always believed LOVE was a word that was too sacred to be used flippantly. My own way was to “show” rather than to “say”. My actions used as my only and most potent weapon to express the depth and purity of my feelings for you.

Love….my love for you. How I so love you. It’s all gone now.  You are gone. Never to return to me.

Yet, I still love you.
But, I was me. And you were you. It is now obvious that my ‘actions’ didn’t meet with your own expectations.

It is painful, more than painful that it has to end this way- this part to follow, my own encore to the whole saga will surely shock you. But, don’t dwell too much on it. It is one more way for me to show you how I love…loved you.

Yes, it is a saga. How I wish I can turn back the hands of time. Relive the good memories we had, the happy times we shared. Capture all the happy moments and make them last forever. But, I am only human and not imbued with superpowers.
My love, it all counts for nought now. The time, flushed away with words that spilled from your divine lips. They crashed against my heart with the force of a hurricane till the cracks appeared, and the cracks opened some more, and my heart totally crumbled under the force of the painful words hurled at them.

Those words which made my heart screech to a halt and refuse to budge since they were spoken.

I thought we were heading somewhere together.
I had dreams, I made plans. I didn’t tell you any of them. Maybe, that is the mistake I made. I should have shared my dreams with you. Make you see what I see in our futures. But, being the kind of person I am…a ‘doer’ – one believing more in actions than mere words, I kept them hidden…working quietly to build the foundations of that dream…in the hope that it will be a pleasant surprise when I spring it on you.

I however didn’t consider the small fact that you might not stick around long enough to see me present my “gifts”.

While I went about putting together my surprise to you, you were also busy doing same to me. And what a surprise!

It is not even the fact that you murdered our love that was most painful.  That pales in comparison to how you ‘killed’ me when you informed me that the pregnancy you  told me earlier was mine, wasn’t mine. I felt my heart squeeze then and I heard it snap. I could almost swear I heard it. The ‘thwack’ sound it made as I sat there listening to you say the words.

Thought you did too. The odd way you looked at me when I didn’t say anything. How I just took it as if I never heard you. Maybe you saw the fear in my eyes….

I have looked forward to a great future with you and the baby; the baby I was made to believe was mine.

Now, there is no future to look forward to. Not for me.

I wish you good luck. You and the baby. In the days ahead, my lawyer will contact you and reveal all of my estates to you. You are the only beneficiary. You and the baby I thought was mine.

The pain is too much to bear; and the ache in my heart won’t let me do anything else than what I am about to do.

Bolarinwa put aside the pencil, folded the three paged paper neatly and placed the folded paper inside a small brown envelope. He licked the flip side of the envelope then sealed it tight.

He looked at the untouched, opened bottle of scotch on the table. He could take a swig, but his strong conviction to do what he had planned without the influence of alcohol or drugs prevented him from doing so. He had been writing furiously for the past forty-five minutes, oblivious to everything else but the task of putting down his thoughts, feelings as he felt them. The way he had never ever being able to express them verbally.

He also need to carry out his own ultimate act of love.

He really needed to do this, for the whole world to see and JUDGE. For the world to know and understand why he has done what he is about to do.

He shook his head, to clear it of any doubts. This has to be done. No point to stick around and be the butt of jokes, the heart – his heart, can’t go on. Not when the anchor that held it firmly in place had been uprooted. He was now left drifting around in murky waters. He has never felt safe that way…and now, he is sure he has to end it all.

He placed the envelope on the table and weighted it down with the still full bottle of scotch.

He stood up, took a short line of rope from beneath the seat and uncurled it, knotting it at one end and making sure it was taut and strong.

He looked around searching the room for something, his eye fell on the side stool where he had kicked it earlier in anger. The stool was on its side, as if cowering in pain from the earlier blow. He picked it up and placed it in the middle of the room, just under the iron hoop in the ceiling, the one meant for the ceiling fan.

He climbed the stool and latched the other end of the rope to the hoop, making sure he tied the rope firmly. He gave the rope three firm tugs to confirm its strength and nodded satisfactorily.

When he came down from the stool, Bolarinwa went to the far wall and took down one of the three framed photos hanging there; the one with him and another woman, a young beautiful woman smiling at the camera.

He kissed the framed photo before smashing it on the floor with all his strength. Then he picked up the picture from the shards of broken glass, placed it on the stool tacking into place with a stapler. He removed his shoes and climbed on the stool, making sure his two feet were firmly placed on the photo – it was his final message to the world.

Without further hesitation, he put the knotted end of the rope around his neck and kicked away the stool.

He didn’t thrash about. He was perfectly calm, still like a pylon in a raging windstorm as his life was snuffed out slowly.

The last thing he thought about as he lapsed into eternal darkness were Wunmi’s words….

“Bola, I loved you. But, right now that love is no longer there. IT IS OVER. The baby is Phillip’s”