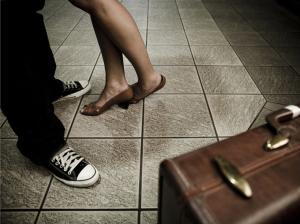 FIYIN
I was caught red-handed, hand in the cookie jar, pants down, fowl ynash blown open. I was in deep trouble and the only way I knew was to run. But before I did, I allowed Doyin kiss me one more time.
“You’re going to tell them you found love,” he whispered or sang or cooed or whatever but I could have taken off my clothes for him right there. Amaka didn’t sleep with him? Ever? Then she dulled herself. Silly prude.
“There’s going to be hell let loose on you but you’re a big girl and you’re no longer in the arms of a man who abuses you. You’re with me now and you are going to be loved the way you ought to be.”
Gbam! That was all I wanted to hear. I needed love and lots of it and since it was clear that my cousin, Lanre, and my friends were never going to let me go back to DJ, then Doyin was going to take over the love business.
He was kissing me again and this time, it was me that led him on. His lips were cold and soft and tasted of the wine he had drunk, killing the sweetness of the apple cider I had taken.
“I have to go and face the panel of judgment,” I mumbled.
“Stay a little. Allow Amaka cool off.”
So I stayed awhile and kissed him some more and had even started running my hands all over his chest when from nowhere, Lanre appeared.
“Fiyinfoluwa, is this a joke or what?” he growled.
I moved away from Doyin immediately and avoided Lanre’s angry gaze.
“No, I just had to come see this for myself. Adedoyin, right?” Lanre assumed his big brother role. “Please, leave before it gets really nasty.”
Doyin tried to be stubborn but I begged him to leave. Lanre was a black belt in Karate and Taekwondo and though he didn’t use his skills on anyone, he was never to be toyed with.
“I’ll see you at the wedding tomorrow.” I gave Doyin a peck and he left.
“Are you drunk?” Lanre asked.
“No.” I straightened my tank top. “So I can’t kiss a man again, I have to be drunk to do that?”
“When I convinced you to leave DJ, it wasn’t so that you will start chasing your friend’s ex!” he almost shouted.
“Nobody’s chasing anybody. We’re just kissing is all and that’s not your business.”
Lanre released a lopsided, humorless smile that made me uneasy. With no more words, he walked ahead and I followed him. I took my mind away from my impending scolding and busied it with other thoughts like what I was going to do to my hair for the white wedding on Sunday.
************

Sally loves to write and has written so many stories and short plays. She lives in Lagos with her husband and daughter. Check out her works on www.moskeda.wordpress.com