A MATTER OF HEIGHT

Chinwe ducked as she entered the store, a reflex she had yet to get rid of since a nasty incident at a similar mart. She had taken it for granted that the overhead would be tall enough for her to get through without incident…till she had found herself on the floor, stars blinking in front of her eyes.

She laughed gently to herself, stretching to her full five foot six. It was not like she was that tall…but she was usually the tallest female in any company. Her love for stiletto heels and slacks made her mother and elder sisters exasperated at times. “Chi baby,” her mother would say, arms akimbo, “how are you going to find a man to marry you if you go around looking intimidating?”

She would laugh and hug her mother. “Mother, if he’s scared so easily then he does not deserve me!” They would all laugh and that would be the end of that.

She felt some moisture gather in her eyes and she impatiently brushed it away, eying the shelves for what she could snack on. Lines and lines of chocolate bars greeted her eyes and she reached for several – before squaring her shoulders and placing them back on the shelf.

“No chocolates for now Ama,” she chided herself gently using her mother’s pet name for her. It was odd, realizing she would not be hearing that name again. Not for a long while.

Frowning at her thoughts, she walked towards another aisle where she saw biscuits, plantain chips and several other stuff. She choose some Ginger biscuits and some Pringles. And then, stopping at the fridge to pick up a pack of Hollandia juice, she carried her purchases to the pay point.

A cute-looking girl attended to the customers while giggling at the jokes of a dark-looking man who stood a few meters away from the cash register.Chinwe placed her purchases on the desk and was reaching for her purse when a voice stopped her.

She looked up to see who had spoken, and found the cashier and the dark-looking guy staring at her. He had a small smile on his face, so she assumed it was he. 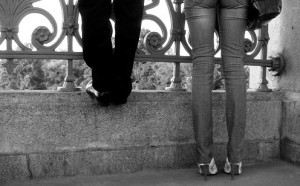 “Excuse me?” she asked, hand pausing at the open mouth of her purse.

He waved his hands innocently. “Don’t mind me. I noticed you pick up some chocolates – and then put them back down. And when a lady does that, she’s usually ‘watching her weight’.

Chinwe smiled. “Oh that. I’m not exactly watching my weight – though that would not be a bad idea by itself. It’s just…” she hesitated, and then continued, “it’s just I promised someone I was going to stop eating them so much.”

He nodded and smiled at her, and she could not help but notice how his face went from being ‘plain looking’ to being pleasant – almost handsome. He bent over and started packing her stuff in some yellow polythene bags. He had long slim fingersbut it looked as though his arms were short. Something was wrong with his proportion; she thought, because he had to be tall to be that visible over the counter and yet…

Chinwe started guiltily and reached into her purse to pull out a thousand naira note. She stretched it towards the cashier but the man; reaching across the counter, pushed her hand away and gave her the bag.

“It’s on the house. You’re that new artist at Tunji’s…abi?”

“I…I can’t…yes, I am…” she stopped, embarrassed. The man just smiled and looked away, waving disarmingly. “We have a business arrangement; Tunji and I. And even if we did not…” his voice trailed away. “I’m Gbemi,” he continued, stretching his hand over the counter again.

Chinwe hesitated for a moment. “Chinwe,” she said and smilingly took his hand. “Thank you.”

Chinwe coolly and firmly withdrew her hand from his. “And what do ‘Chinwes’ look like?”

He leaned back. “Don’t worry. I’m sure there’ll be some other time. I’ll tell you then,” he grinned hugely as though at some private joke and turned away.

Chinwe sighed as she leaned back in her chair. It had been a long day, but finally it was over.

Standing up and stretching, she hastily cleaned biscuit wrapper and crumbs off her table and into the bin beside her desk before shutting down her system.She slung her backpack on her shoulder and headed towards the exit.

“See you tomorrow,” she said to the cleaner as she stepped into the main corridor. Her mind wandered over her day; and then stopped at the guy she had met in the store.

You’ve been single for too long girl; she thought, smiling as she walked. Maybe I just need to get out more.

She was close to the exit before she noticed the two people almost blocking it. One was her boss and the other…he looked familiar but something about him was all wrong. She took a few steps closer before everything became clear to her at once. It was the guy from the store…Gbemi.

They looked up as she approached and her boss started smiling at her. “Hey Chi, I’d like you to meet…” then he noticed the way she was staring at Gbemi, who was looking up at her with a small smile.

Yes. ‘Looking up’ was the only way to describe it, because his head rose only a few meters above her shoulders as she stopped beside him and stared in mock horror.

Seun Odukoya is a crazy guy. Loves writing and women. He is also a true lover of life and everything good in it. He is also a film director, song writer and hip hop artiste.

You can read more of his works by clicking this link http://seunodukoya.wordpress.com/ or follow on twitter @seunodukoya